Home»About Us»Blogs»Common Water Softener Problems: What is a Salt Bridge?

Common Water Softener Problems: What is a Salt Bridge? 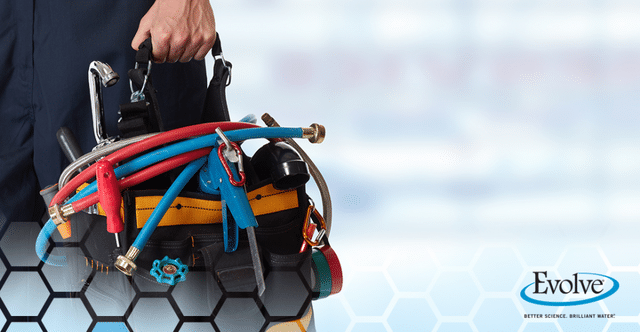 Like most of your other large appliances in your home, your water softener takes a little bit of maintenance to keep it efficiently providing softened water through your home. It normally involves pretty basic tasks revolving around remembering to keep enough salt in the brine tank. It may not seem like a big deal, but salt plays a very important role in making sure your water softener continues to reduce the hardness minerals on a daily basis for your home. And while that usually means making the occasional trip down to the basement to check salt levels, the peace of mind that comes with knowing that softened water is actually prolonging the life and reducing maintenance on the rest of your water-using appliances makes that minor inconvenience well worth it.

And again, like the other large appliances in your home, your softener may occasionally need a little extra attention. Often times a problem with your system will go unnoticed until the normally softened water in your home starts to feel unconditioned, a sign that the softener isn’t providing treated water. One of the more common issues that can cause this, and one of the easiest to remedy, is called salt bridging. Understanding what a salt bridge is, how it can occur, how to fix it, and how to prevent it from happening again are useful skills for any water softener owner.

What is a Salt Bridge? 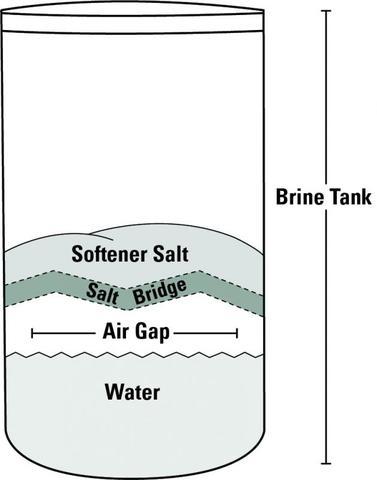 Salt bridging occurs within the brine tank, the large supplementary tank next to your softener that creates a brine solution to recharge the resin beads in the primary media tank. A salt bridge is a solidified layer or crust of salt that spans the entire diameter of the brine tank. This surface crust creates a solid blockage that prevents the salt on top of it from coming in contact with the layer of water in the tank beneath it.

To understand how this occurs and why it can be so detrimental to the function of your water softener, it’s important to first understand how the brine tank works. In all Evolve Series water softeners, salt is added to the brine tank and is stored until the water softener enters a state of regeneration. This is called “dry storage,” meaning water is only in the tank during periods in which it is needed. During regeneration, a measured amount of water enters the brine tank from the bottom and sits for a pre-determined amount of time, letting the salt dissolve into the water, forming a brine solution. This brine solution is then pumped into the main softener media tank where it comes in contact with the resin beads inside, recharging or regenerating them. This resets the media beads allowing them to function again, removing hardness from raw water.

As the water is working away at dissolving the salt, sometimes the salt crystals will clump back together forming a solid layer that holds its shape long after the saltwater leaves the brine tank. That is what we call a “salt bridge.”  When a salt bridge occurs, the crusty, solidified layer of salt that is formed creates a wall between the salt and the water that flows into the bottom of the brine tank. Because the water level cannot reach the salt above, a brine solution is unable to be created. As salt is a critical part of the regeneration process, the raw water is unable to recharge the resin media within the media tank. The resin media is not able to remove the hardness elements in the water, leaving unconditioned, hard water to flow to the taps and appliances in your home.

How do I know if I have a salt bridge?

The telltale sign of a salt bridge is if your water begins to feel like it did before you had a water softener installed. If your water feels different to the touch, your hair seems more course and frizzy, your skin is drying out fast, your soaps begin to not perform as well as they normally do, or you notice scale around faucets, then your softener is not providing soft water.

The next step is inspecting the brine tank. A salt bridge can be disguised by resting below a fresh layer of salt and may not be immediately visible. Using an object with a long, thin, sturdy handle, such as a broom, can often determine if a bridge is present.

How to fix a salt bridge

Thankfully, once a salt bridge is identified, its removal is a simple process. It involves scooping out the loose salt that is above the bridge, using a long-handled item to break the crust, and removing the large, chunky pieces of the bridge which are then discarded. The brine tank should then be cleaned and refilled with the proper amount of salt; then regeneration can begin. Your qualified Evolve dealer is always available to answer questions and assist in the removal of a salt bridge if you suspect one has developed in your brine tank.

Preventing a salt bridge in the future

There are several steps you can take to prevent a salt bridge from occurring. Bridges tend to form in more humid environments, so accounting for humidity can help prevent them from forming. Humidity can be prevented, especially in the summer months or in more humid climates, by ensuring that the brine tank lid is always on securely.  Using the correct, manufacturer-approved salt in your brine tank can also prevent bridging and other problems from occurring. And lastly, ensuring that you are not overfilling the brine tank is critical in preventing problems. Evolve softener brine tanks should usually be kept 1/3 to 2/3 full.

Understanding more about common problems associated with your water softener can leave you better equipped to deal with issues when they occasionally happen and allow you to return to being supplied with soft water sooner. If you have questions or issues with your water softener underperforming, a call to your nearest Evolve dealer can get you the answers you need!